skip to main | skip to sidebar

Yeah yeah, so Supermaxi's not on High Street, but it is on St George's Road, a ten minute stroll from the Westgarth end of the Street Referred To In This Blog's Name. 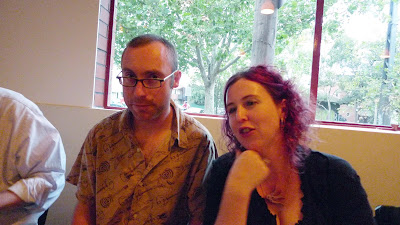 Cool.
It's also in North Fitzroy; it's right next to the bike path; it's only been open a few weeks; and, between us booking and eating, got a good review in the broadsheet. In other words, it's exceedingly hip, extravagantly groovy and crowded with coolhunters. Which suits me just fine, because I am a coolhunter hunter, focused not on the next cool thing, but on the people who will find it. It's all very meta and self-referential, so from time to time you'll have to forgive me for talking total wank. 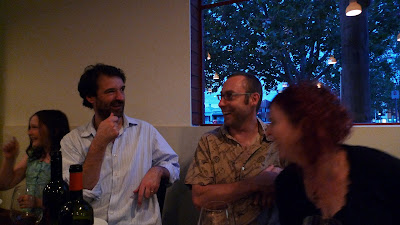 Somebody's talking wank here.
On this night we'd been invited by Suzanne and JB, who were seeking out my coolhunter hunter skills not because they needed them, but because are specialist coolhunter hunter hunters. Amazing really - sometimes I can't remember if any of us really exist or who's following who. Also in attendance was Mel* and Matt, who are just cool, three teens (or proto-teens) and two small humans.

Supermaxi 's minimalist decor and maximalist crowd noise provide an intense backdrop for the food and for a cheerful shouted conversation. Being coolhunter hunter hunters, Suzanne and JB reported that they'd been there a week or two earlier and that the food was worth the layers of self-referential, nested conversations about who was a coolhunter/hunter and who was just hungry and wanted dinner. 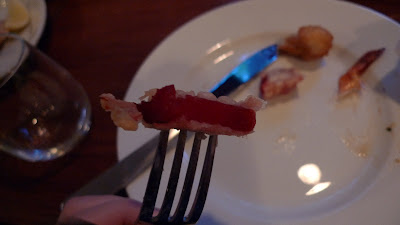 Battered Beetroot - earthy, powerful and red with an attractive exterior.
(Insert Julia Gillard reference *here*.)
Organising a table of 11 to get their act together to order is hard at the best of times, but Suzanne took charge of the situation and the entrees. The Cauliflower fritters were creamy and soft in the middle while still firm and the batter was perfectly crisp. The onion jam that came with them was sweet and tart. For a glorious colour hit, the Beetroot fritters were earthy and sweet. Simple, smoky grilled prawns in their shells quickly followed and were promptly devoured. Cool. 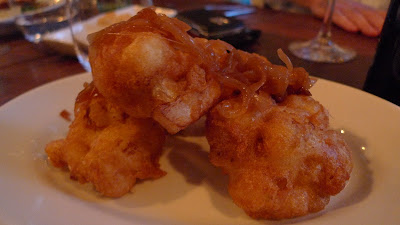 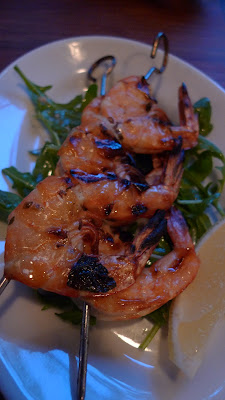 The only thing that arched an eyebrow or two was the Oysters Kilpatrik, mainly because no-one could remember if they are meant to be retro-cool; nostalgically comfortable; neo-seventies or whether they've gone right through to "were popular years ago, then shunned before passing through charmingly naff and retro but are out the other side back to being mocked". That's the problem with being a coolhunter hunter - sometimes you have to draw a flowchart to remember where a particular meme is up to.

Anyway, although these were good, I prefer oysters to be a bit more like Ursula Andress - not covered in much and fresh out of the sea.

We ordered a mix of pizzas and other dishes. The pizzas are the best we have had yet in the area, edging ahead of both I Saluti and Pizza Farro . With thin and asymmetrical non-conformist bases, all were both comforting and interesting enough to hold your attention to the last bite. I had the pizza de jour, which had broccolini, anchovies and chili, and thanks to a mix up in the order, got to share it and the fish of the day with Matt.

The pan fried fillets of white fish had a glorious crispness and a lingering taste of butter. It was cooked perfectly. 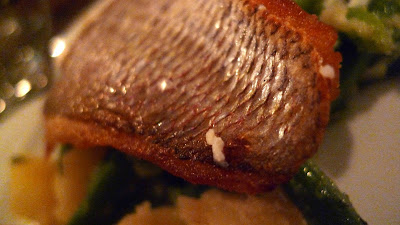 Fish of the day, but I can't remember what kind it was
Others ordered the pescatore pizza, which was described as perfect; a "GTV" with eggplant and which was named after the chef's Alfa Romeo; and a beautiful pancetta and Gorgonzola pizza which I will definitely be ordering at some time in the future. 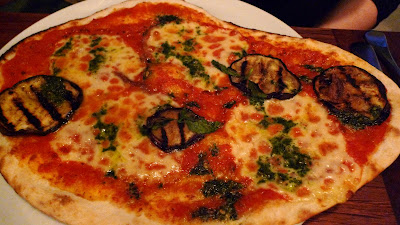 Idiosyncratic like an Alfa Romeo, but more reliable
I didn't get to taste Emily's artichoke ravioli, but after she'd eaten it she was sitting back in her chair and black leather coat, looking both satisfied and, of course, cool. 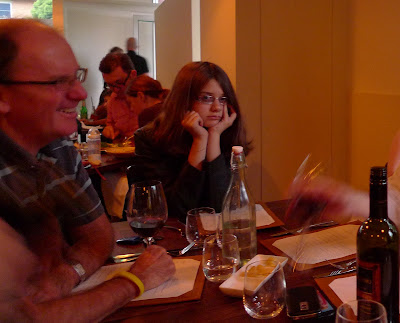 Put the camera away mum - it's very uncool
We had some beautiful Italian wines, but don't ask me what they were. Remembering wine labels is passe and verges on the gauche.

We almost all ordered dessert, which is a damn good sign, and these didn't disappoint. The fried custard was thick and gloriously unctuous, and was served with a drizzle of honey giving it a beautiful Moorish sense of mystery. Emily had the chocolate panna cotta and raspberry, and it had the light touch of a great panna cotta, perfectly balanced between richness and light with the slight bitterness of good cocoa. 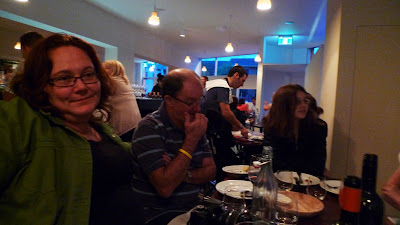 The skeptical looks typical of coolhunter hunter hunters
In summary, Supermaxi has cool food, good service (although the night was frantically busy) but is amazingly loud and required some uncool raising of voices. There were no surprises either way with the bill, and in the best sign of a good night, it wasn't until I got home that i realised how amazingly tired I was. I'd go again, but once I've been somewhere it generally doesn't stay cool for much longer. However, I will be going again once it becomes passe, because that's when I feel most at home.
Posted by Michael at 4:07 AM

Where on Earth are we talking about?

So what's it all about then?

Our mission is to try all the restaurants in our little corner of the world, in the inner northern suburbs of Melbourne Australia, and share them with you, whether you like it or not.

We've set out with a smile, a song and a cheese knife. It may be hard at times, but there's always coffee to look forward to.